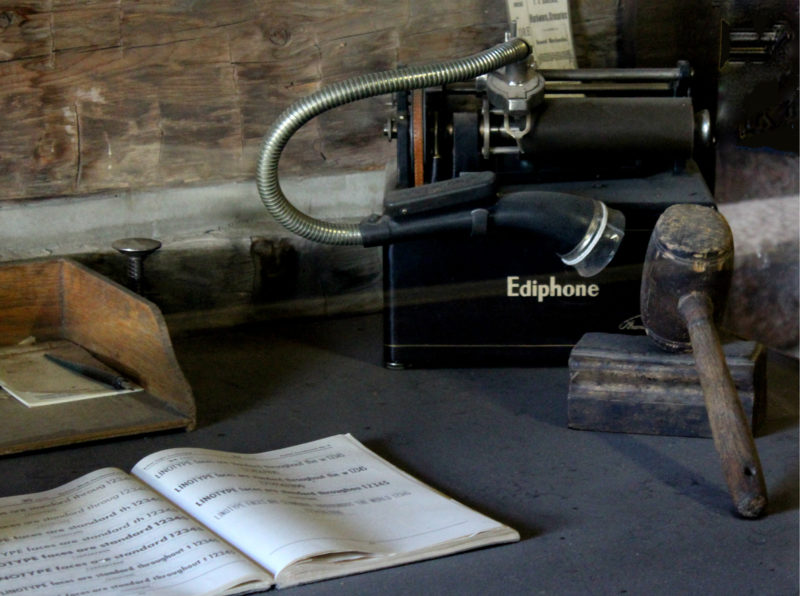 Dolbey and Company has been going strong since 1914, but the technology for recording voice and sound had an interesting history even before we came onto the scene! From Edison’s phonograph to modern digital audio files, sound and voice recording has a rich history.

It all started back in 1877 when the great inventor Thomas Edison (a Dolbey reseller partner) created the phonograph. This was a piece of office equipment to play and record music. Edison drew inspiration from the telephone and the telegraph, which were two other devices that he contributed to inventing. When Edison spoke into the mouthpiece on the phonograph, the vibrations from his voice would move a needle to draw out what he said and then play it back. Edison tested the invention out for the first time with the nursery rhyme “Mary Had a Little Lamb.”

Edison had a lot of hopes for his invention. He wanted it to be used for letter writing, dictation, music boxes, and more. Some of his more outrageous ideas (like clocks that audibly told time and a device that preserved family members’ voices for posterity) never quite became realities—or at least didn’t catch on in popularity. 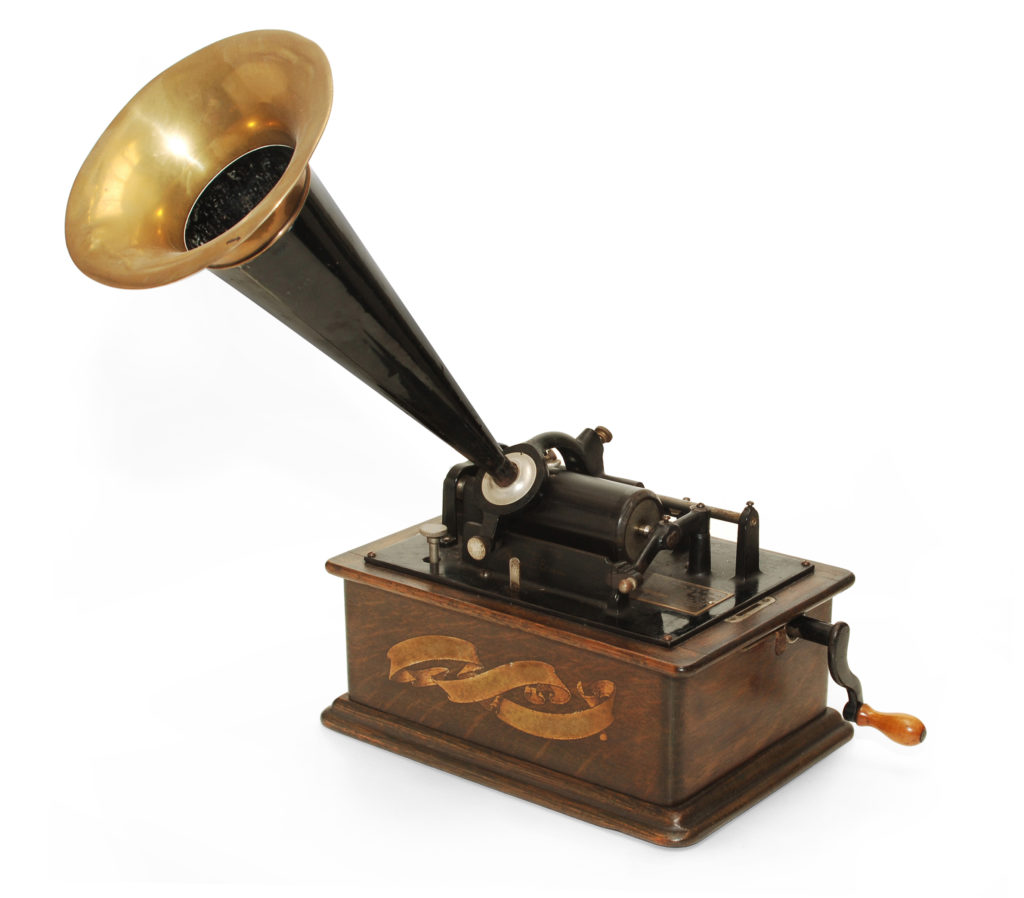 Although there was a lot of early interest in Edison’s machine, he quickly lost interest in working on it and focused instead on other endeavors—most notably the lightbulb. In Edison’s hiatus from the phonograph, telephone inventor Alexander Graham Bell joined forces with Charles Sumner Tainter to make a device similar to the phonograph but with a recording component. They called it the graphophone and got a patent for it in 1886, two years before Edison took his phonograph to market. Later, the phonograph became known as the gramophone, which is where we get the term “Grammy.” Grammys (the awards themselves) are shaped like gramophones.

Edison also invented what would be marketed as the Ediphone, which was one of two competing reusable wax cylinder phonograph systems for voice dictation, the other being the Dictaphone system.

Bell started the company International Dictaphone Corporation to sell his graphophone. Edison responded with his own Edison Speaking Phonograph Company to sell his similar invention. The phonograph underwent many evolutions. The first was the foil recorder, which was Edison’s version of the invention. The portion of the device that recorded the sound was wrapped in tin foil. 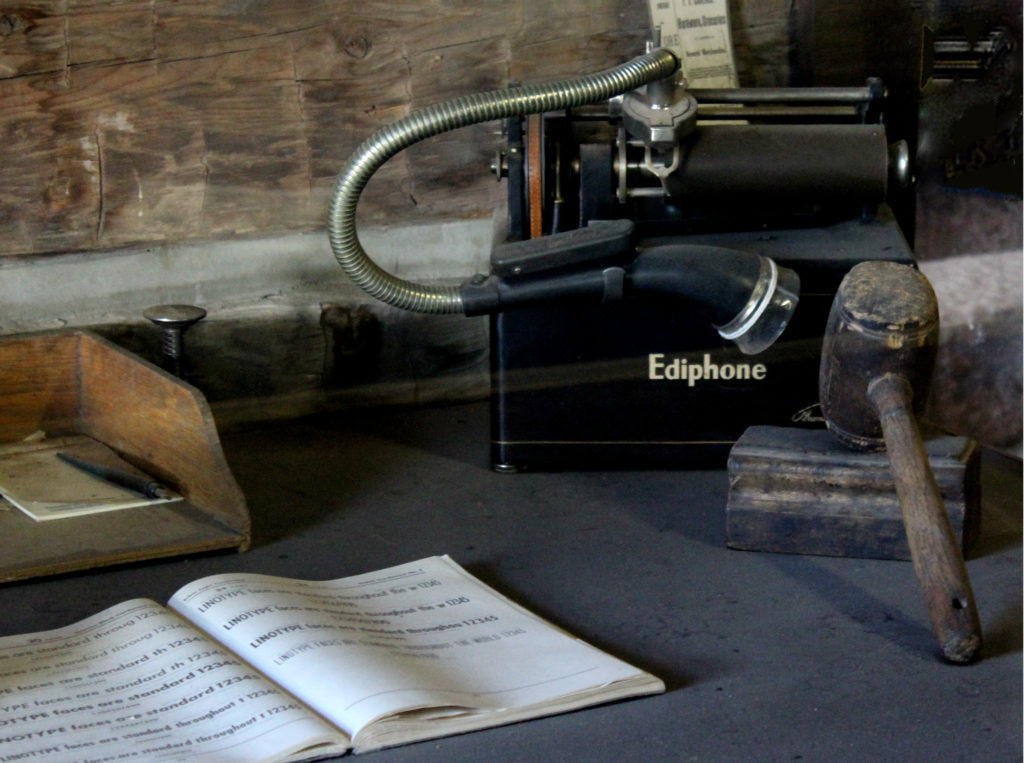 An antique desk and phone.

In 1898, Bell came out with a wax cylinder version, which was much more practical and effective. The recording portion of this machine was made of cardboard and coated in wax. That same year, Valdemar Poulsen created a wire recording version that he called a telegraphone. With this machine, the recording was transferred to thin pieces of steel or wire. These did not become widely used until the 1940s and 1950s thanks to Curt Stille’s alteration to the device, which included electronic implication.

German inventors contributed to the history of sound recording with magnetic tape. The first machine to use magnetic tape to record was called the K1. What’s different about this machine was that even before you recorded any audio on the tape, there was already a high-frequency signal of 50 to 150 kHz that was too quiet for people to hear. This dramatically altered the sound quality of these machines for the better.

Bell’s company added the dictaphone plastic belt in 1947. These thin plastic belts improved the audio quality even more. They were also easier to store than the previous wax cylinders because they took up so much less space.

In 1961, IBM joined in the audio recording competition with their Executary line of dictation equipment. With this device, you could record into a magnetic belt and, unlike previous dictation machines, you could actually edit your recording by erasing and replacing audio. This was a highly efficient dictation machine!

In 1962, the Philips Company came out with the compact cassette, commencing a new type of technology in the audio industry. These cassettes were smaller and used analog magnetic tape to record the audio. Like the Executory, the audio could be edited by the person recording. However, the original sound quality of these cassette tapes was not very good. In 1967, Philips created a smaller version of their cassette—known as the mini-cassette.

In 1972, Dictaphone came out with Thought Tank. With this revolutionary machine, you could record and transcribe audio with the same device. This saved time and space, as the user no longer needed two machines to perform the task. This machine could also record up to sixty minutes of audio, which was a much larger capacity than previous machines. There was only a twelve-second lag between recording and transcribing. That same year, RTAS patented digital dictation.

Cassette tapes continued to rise in popularity. The Lanier Standard Cassette was also released in 1972 and became the standard. With these cassettes, you could change the speed and erase the audio recording. In the 80s, there was more of a shift to digital recording, namely because of compact discs (CDs). The Bee Gee’s Album Living Eyes being played on television exposed the world to the new invention for the first time. Billy Joel’s 52nd Street was the first CD to hit the market. Philips and Sony created these CDs, and the earliest versions could hold 10 MB of sound.

In 1993, the Random Access Digital Audio Recorder (RADAR) hit the market. This technology was special because it gave you the ability to record multiple tracks of audio — twenty-four to be exact. CDs remained the main mode of audio recording through the beginning of the 21st century.

It’s amazing to see just how far sound recording has come in 150 years and all the drastic changes that have occurred. It’s hard to know where the industry will be going next and what exciting inventions are in store.